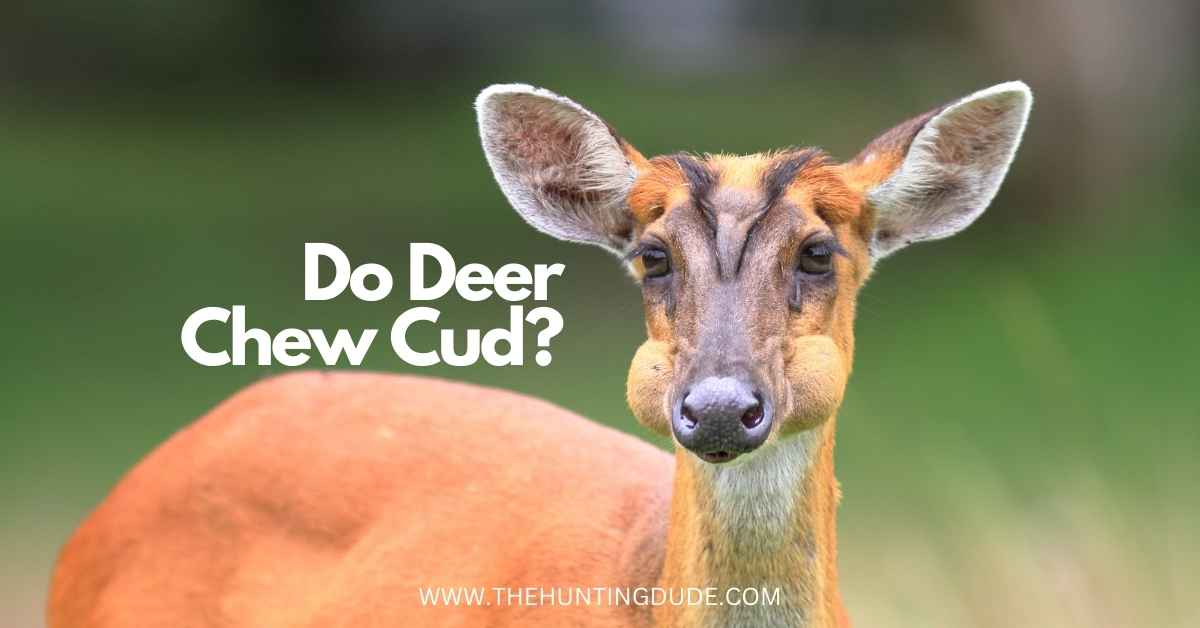 Have you ever seen a deer gobbling up a large portion of leaves and wondered why they do it? Get ready because we’re going to satiate your curiosity.

Let’s explore what is “chewing the cud” and why deer and other herbivores do it.

Deer are marvelous browsers of the wild, whose diet solely depends on green leafy plants, buds, twigs, and grass blades. Such a diet is full of cellulose, and digesting a meal full of cellulose is a complicated task, even for herbivores.

But, particular adaptations, symbiosis, and a specialized digestive system have made it easier for deer to digest a considerable amount of cellulose-containing diet.

Here is a little clue; herbivore animals like goats, sheep, deer, and cattle have a special chamber in their stomach known as a rumen which controls the digestive activity of these animals. And species with rumen are called ruminants.

While hunting in the wild, you have to be alert, especially when a browser is busy gobbling up its food. Deers are mostly active at dawn and dusk, so being a hunter, you have to plan your hunt accordingly.

Deer are ruminants, and in the following section, we will be discussing the specialized digestive system of ruminants in detail.

If you are a new hunter, you need to know about the special gut system of deer and other ruminants. Here are some details.

Ruminants browse freely on herbs and green plants. Every living being competes with one another, and deers are adapted to live in a territory where competition for food is high.

So how do they survive when food is scarce?

They browse and gobble up on plants at once without wasting a second on chewing. All ruminants swallow their food at once and fill up the upper portion of their stomach. And once done, they sit quietly and chew the cud while enjoying the beautiful view of nature.

Yes, we have mentioned the term “upper portion of the stomach.”

Thanks to the specialized digestive system, ruminants have multiple divisions of the stomach that we will discuss later.

In the meantime, let’s jump to the main question “what cud is and why deer chew it?”

Deer and other ruminants swallow a big portion of food and then bring it back to their mouth to chew it properly. The partially digested food that just comes back to the deer’s mouth from the stomach is called cud.

Typically, a cud is of lemon size so ruminants won’t spew their food and can regurgitate it easily.

Ruminants regurgitate their cud and break it into smaller parts for proper digestion.

If you observe a ruminant while eating, you’ll notice that once they swallow their food, they bring it back to their mouth and start chewing the cud.

Well, at least the deer’s mom doesn’t have to tell them to chew their meals properly because they love to do it.

Unlike the human stomach, which is single-chambered and stores, plus digests the food, ruminants have a four-chambered specialized stomach. In humans, peristaltic movement results in vomiting, while peristalsis is the core function of a ruminant’s digestive system.

The four chambers of the specialized digestive system of deer are as follows:

Deers ingest the food, and the esophagus directs the food toward the first chamber of their stomach, called the rumen.

The rumen is a storage chamber that allows deers to gulp significant portions of food. Once the rumen is full, the peristaltic movements help deer bring back a tiny portion of swallowed food to their mouth to masticate and break the food into smaller parts. As the process is initiated from the rumen, it is called ruminating; thus, all ruminating herbivores are called ruminants.

The reticulum is the second chamber of the deer’s stomach. It receives chewed bolus and functions to break cellulose into digestible particles. The deer’s reticulum contains microorganisms that help break cellulose by producing the enzyme cellulase.

Deers, in general, can’t digest cellulose, but microorganism flora present in their stomach can.

Once the microorganisms start breaking down the cellulose in the reticulum, the deer’s stomach produces an immense amount of methane. Deers thus burp and excrete methane gas out of their body. The microorganism activity in the digestion of cellulose is known as fermentation.

Note that deer chew their cud from the rumen and reticulum only. In the second attempt, their cud contains microorganisms, which they regurgitate. Most of the nutrients come from the breakdown of microorganisms.

On the other hand, the reticulum is left with plenty of microorganisms that help in the digestion of food in the next round. The point here is; that even though ruminants chew the cud with microorganisms, the population of microbes in the reticulum never breaks off.

Once deer swallow the food from the reticulum, it directly goes to the third chamber, the omasum. The omasum absorbs the water from the cud and passes the remaining bolus to the fourth chamber – the abomasum.

Once the ruminant receives all the nutrients from the food, it excretes remnants as waste droppings.

How Does Cud Come Back to Deer’s Mouth?

Once the rumen is full of meal, an expansion of the trunk creates a vacuum in the upper portion. Such pressure sucks the food back up from the rumen to the mouth of the ruminant. Ruminants catch the cud in their mouth by pressing it against the roof of the mouth with their tongue, and by this, they gulp the water from the bolus and start regurgitating.

Do Ruminants Have Symbiotic Relationship with Microbes?

Symbiosis is a mutualistic relationship between two organisms that benefit from one another. The same is true in ruminants and the flora of microorganisms living in their stomachs. The microorganisms help break down and digest cellulose (which deer can’t digest themselves). In contrast, the deer gives habitat and nutrition to the microorganisms from chewed cud.

For humans, green leafy vegetables are suitable for the digestive system. The reason is that humans lack the cellulose digesting enzyme cellulase and can’t digest the whole food. As a result, the human body expels or excretes high-fiber food and eases bowel movements. However, consuming too many green vegetables can be hazardous for humans. But as we say, experts know it all, and so do ruminants.

Deer chew their cud like all other ruminants. They are programmed in that way. Ruminants, including camel, giraffe, elk, moose, and cattle, have an advanced and specialized digestive system, with rumen as the star of the show.

The rumen stores the food and sends it back to the mouth for regurgitation. Thus we call the process rumination, and the animals who do it ruminants.

The food consumption cycle of a ruminant is simple; browse, gobble, sit, and chew. Everything else is the magic work of their digestive system.

1) How many stomachs does a deer have?

Deer have a single specialized stomach that is segregated into four quarters. The first quarter, the rumen, stores food. The second quarter reticulum contains microorganisms to break down cellulose obtained from green plants. In the third quarter, the omasum absorbs water content. And the fourth quarter, the abomasum, contains gastric juices for proper food digestion.

Yes, deer are ruminants. They have rumen as the first chamber of their stomach, helping them store grazed or browsed food. The rumen is a specialized chamber that allows deer to engulf an enormous amount of food and then store the meal for regurgitation.

3) Do deer browse or graze?

Deer browse and graze as well. And it all depends on the accessibility of food. Browsers deer include white-tailed species which feed on leaves, bark, and stems when there is nothing to graze. In comparison, mouse deer graze on vegetation near the ground.

4) Are all ruminants herbivore?

Yes, all the ruminants are herbivore. They contain a specialized digestive system that digests the cellulose obtained from herbs, shrubs, and green vegetation.